“The Social Network” hype – did it prove too much for the box office? 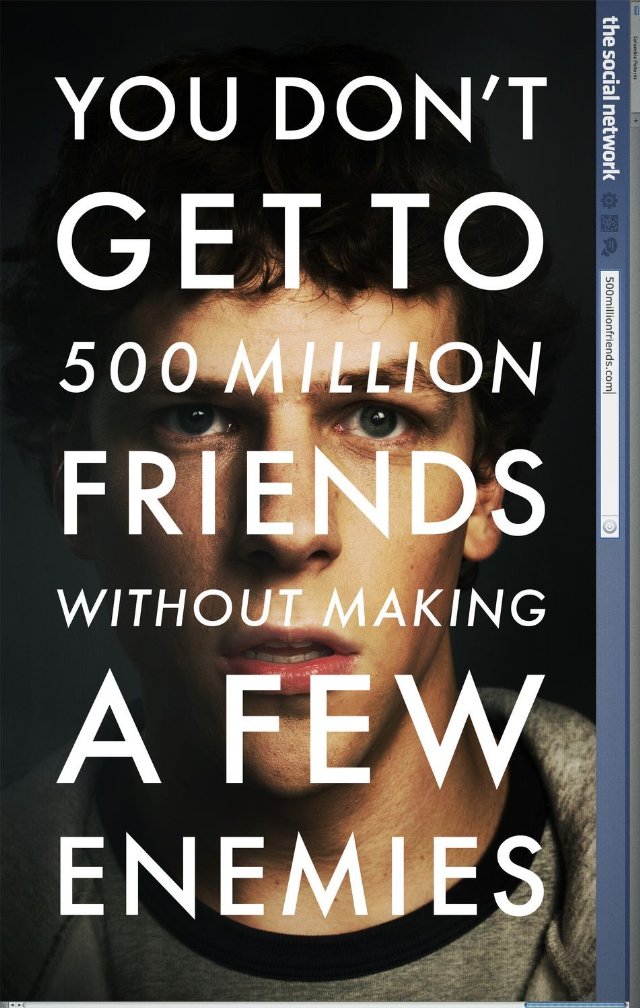 Back in early September, on Subject:CINEMA’s
Fall Preview Special, I didn’t beat around the bush – I came right out and said
that I thought that the hype surrounding the release of The Social
Network was a bit much, and that despite all the kids talking about it,
that it would at the very least underperform at the box office, if it wasn’t an
outright bomb.

Although it opened to mostly stellar reviews (including,
surprisingly,  mine – it’s easily one of the best, most entertaining films
of the year), and good word of mouth, The Social Network finished
the weekend at #1, but it still underperformed.  It posted a weekend total
of $22.4 Million, a little under the $25 predicted by Deadline Hollywood
and far below the $30-$32 Million predicted by the usual prognosticating gurus,
The Numbers and Box Office Mojo.

Well, the movie isn’t the kind of pic that plays well to
older-skewing audiences. Let’s face it – Facebook is mostly used by
under-30s, although a good deal of adults use it (including me). But the
under-30 set (along with internet savvy older folks) know Mark Zuckerberg’s
name, because he’s one of their peers. Most over 30s don’t know the name at
all.

But it DID play well with the Academy. At an Oscar
screening in Hollywood where 80% of the audience was over 50, the film played
extremely well. But NOT as well as it could have.  Comments around the net
have the film being met with good applause at the end, and again following the
credits, but not the overwhelming reaction at individual names in the credits,
as usually happens at Academy screenings when the movie is really hot.

I can say this, as I said on my review on this week’s S:C
– Justin Timberlake is going to be Jeremy Renner’s
biggest competition for Best Supporting Actor come awards-time. Renner was
Oscar-worthy electric in The Town, but Timberlake picks up TSN
and walks away with it from the moment his character, Napster creator
Sean Parker, first enters the scene about an hour into the film.  And
while Jesse Eisenberg’s performance as Zuckerberg is also fantastic, he
may be overshadowed by others in the lead actor category. Andrew Garfield
might eke out a Supporting nom for TSN as well, which will throw
the award to Renner almost for sure. But as much as I loved him here…he’s STILL
Not right for Spider-Man….:-)  And although I do think the
film will be in the elite ten nominated for Best Picture,  I don’t think
it will win. It doesn’t feel right, and doesn’t have enough punch Academy-wise
to be a real  threat to  heavyweight competition like The
Kings’ Speech, Inception, and possibly Rabbit
Hole, Blue Valentine, and Animal Kingdom.

Anyway, the Oscar race is getting more interesting by the
day…and The Social Network, despite it’s underperformance at this
weekend’s box office, may well yet be a contender…don’t count it out. Not by a
long shot.