CONFESSIONS: I can’t handle “The Walk”…and here’s why…

I’ve been dreading this for a  while, but it is now time to come clean.

I am a HUGE fan of Joseph Gordon-Levitt. Not only is he an alum of our website and podcast’s annual “Rising Stars Honors”, he is quite simply one of the greatest actors of his generation. Even when he’s picked questionable projects over the years, his performance has always been stellar, even if the material hasn’t been. 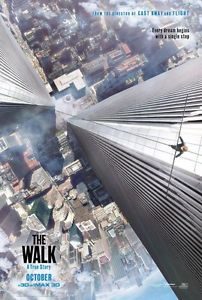 Walk” once it opens this fall.   Not that I have a problem with this film as a whole; I most certainly do NOT – it’s a top notch story, one that was already a runaway smash as the documentary “Man On Wire” from 2011. I have never had a problem with director Robert Zemeckis either; I was one of the few people that loved his interpretation of “Beowulf” a few years back, not to mention classics like “Back To The Future”.

No, it’s not a problem with the star or director. In fact, I would love to see the film. But there’s only one reason I won’t be seeing “The Walk”. And it’s for the same reason I didn’t see “Man on Wire” either.  Simply put – I can’t.

It doesn’t have anything to do with the fact that it’s about the World Trade Center. I can sit through 9/11 documentaries and news stories mostly without batting an eye visually – the tragedy of that day is seared in my mind, and millions of others feel the same way, I’m sure.

No, it has to do with personal issues. Ones that are very deeply ingrained in my psyche. And I’m sure I’m not the only person having an issue with this, either.

Since two incidents when I was a small child – one, a harrowing trip on the outside deck of Seattle’s Space Needle when I was four, and the other my first – and last – ferris wheel ride when I was seven – I have suffered from severe vertigo. I can generally look down if I’m in a building and it isn’t too far up – maybe 10 stories tops. Any higher is doubtful. And strangely enough, I have trouble looking UP at tall buildings too, which is why I was glad it was foggy when I visited New York in 2008. In both of the above examples, I get very dizzy, and start having a number of issues with my equilibrium.

Needless to say, a number of recent films have featured shots that combine in certain ways to make them difficult to watch. The various daredevil heights shots from nearly all of Tom Cruise’s Mission:Impossible films; the scenes on the towers in Shanghai in “The Dark Knight”; a scene or two in “Skyfall”. And practically any shot from a plane or helicopter where a fish-eye lens has been used. As my friends and fellow film goers will tell you, anytime something like this comes on, my eyes instantly drop to the floor for fear of having to run and say “Goodbye, Lunch!”.

So imagine my horror, and how many problems I have had, just from the TRAILER for “The Walk”. It’s opening tracking shot up the side of one of the Twin Towers, then the scene on the roof where Gordon-Levitt looks down to the street below. My stomach is rolling just THINKING about it. Literally. It’s the same feeling I get when I’m sitting at home watching Travel Channel shows on hypercoasters even though I KNOW I’m going to have to turn away at some point or get sick. But this film and its trailer are on a much grander scale than those TV specials.

The full trailer for the film is now everywhere – you can’t get away from it. When it pops up as an ad on YouTube, I quickly skip over it. I’m dreading it turning up at an upcoming screening at our local theatre – I’ll probably have to leave the theater until it’s over.

A suggestion to theater operators and to TriStar/Sony Pictures – like several films about 9/11 and the film “Cloverfield”, this film’s trailer could use a disclaimer – not for motion sickness but for vertigo issues. I would hate to see a theatre full of unsuspecting audience members who might have a few among them with my issues get sick as I do. Especially since the film is looking more and more like a major Oscar contender, thanks to its prestige spot as the opening film for the New York Film Festival this year.

So my apologies to Gordon-Levitt and Zemeckis for my own personal weaknesses that make it impossible to see their film. It is my hope that it will be both very good and very successful. And it’s unfortunately that it will have to be such without my own chance to review it.