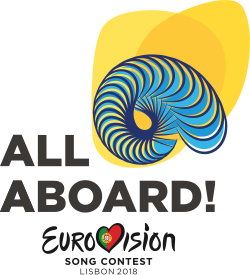 The Eurovision Song Contest 2018 has just concluded in Lisbon, Portugal, and it was a CLOSE ONE all the way to the end. But in the end, the oddsmakers were right from the start, as Israel’s 24 year old rapper/singer dynamo Netta clenched the win with a MASSIVE televote victory for her smash hit “Toy”, already a number one hit in Israel, and winding its way around the world without a doubt.  The song clenched victory with a combined total of 529 points.

Austria’s Cesar Sampson  and his song “Nobody But You” was in the lead after the jury votes were tabulated and announced, but massive televoting for several other songs made it clear that either Netta or Cypress’ entry, “Fuego” by Eleni Foureira, would top it after it came in lower in the televote.

“Fuego” finished in second place with 436 points, followed by “Nobody But You”, which 342 points, just ahead of Germany’s 340 points for Michael Schulte’s beautiful tribute to his late father, “You Made Me Walk Alone”. Fifth place went to Italy’s Ermal Meta & Fabrizio Moro for their powerful anti-terrorism and anti-war anthem “Non me avete fatto niente”. Rounding out the top ten were Czech Republic’s “Lie To Me”, Mikolas Josef; Sweden’s “Dance You Off”, Benjamin Ingrosso; Estonia’s “La forza”, Elina Nechayeva; Denmark’s “Higher Ground”, Rasmussen; and Moldova’s “My Lucky Day”, DoReDos.

United Kingdom’s SuRie elected not to perform her song “Storm” again after her performance was interrupted by an audience member who jumped up and grabbed her microphone during her performance. She recovered and did a splendid job getting through the rest of the song. I hope the bastard that did that to her performance spends a long time in jail…that was just not cool!

Portugal’s “O jardim” by Claudia Pascoal finished last in the competition, the first time in a number of years where the host country who won last year (it was Portugal’s Salvador Sobral and his song “Amar pelos dois” which gave the country their first-ever win at the 2017 contest) has finished last.

Speaking of Sobral, the 28 year old singer made a triumphant return to the stage, his first major live performance since undergoing a successful heart transplant last December; he looked vibrant and active, and was obviously thrilled to be back on stage at Eurovision once again.

EuroVision is a songwriting contest, so the actual winners along with Netta this year are songwriters Doron Medalie and Stav Beger.

We’ll have more on this year’s EuroVision Song Contest on NEXT WEEK’s Subject:CINEMA!