BOX OFFICE QB: Why we decided to quit Showcase Subscribe

You know, they’re all the rage, these movie ticket membership apps. You sign up, and you get “X” amount of movies for “X” amount of dollars a month.  MoviePass started the trend, but then the cinemas had to get in on it too.

After weighing the options, Kim and I decided to go ahead, take the plunge, and join Showcase Subscribe. There were a lot of drawbacks – A LOT of drawbacks – but we chose Showcase because it’s our home theater, just about a quarter of a mile from our home. It’s comfortable, they have decent sound, recliners, a restaurant we really love called Chatters, and pretty decent staffers.

We see a lot of films every year. Duh…we run a FILM SITE, and host a FILM PODCAST. We’re going to see a lot of 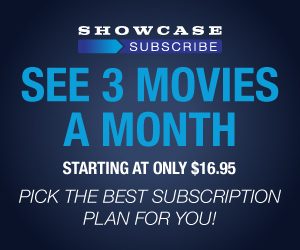 films every year. So we figured out that this plan would save us about $50-70 a month. We signed up for 3 films a month on the 2-person plan for $38.95 a month – right there, the first drawback, almost THREE TIMES the cost at other theaters for one of these membership type plans. But also at the time, it was the only pass offering a multiperson option, and we liked that – MoviePass has NEVER gotten around to doing a couples option, AMC Stubs A+List also has no multiple person membership, and they’re the only other one we’d probably consider doing, because there are a number of AMC theaters in the metro Boston area.

First you had to commit to a minimum of three months’ membership. Even if you never used it. We had several times where we paid $40 for NOTHING because either 1) we had no time to get there or 2) there was nothing showing here we wanted to see; Showcase has sadly been experts at that second one lately.

Second, if you wanted to order for a film that straddled your subscription date, you had to go in and manually renew early. WTF? You have my credit card number, you’re going to charge me anyway. This happened TWICE in the run we’ve had with the membership. To me, they shouldn’t make you renew early (after which you LOSE any tickets you still had coming the previous month, by the way – TWICE we lost TWO films), they should just block you from preventing them from charging you for the forthcoming month.

Then there’s the Showcase Subscribe app….OH MY GOD I freaking HATE THIS FORKING APP!!! This app is the most user unfriendly app I have ever encountered. The first time I used it I was just checking showtimes, and it locked up, and ended up using one of our three movies. It took the customer service department three days to fix it, return my movie credit, and they were ‘so sorry’ about it. Then I had booked another movie, and we had something come up so I tried to use the “cancel” feature. Nope – it swore up and down I had nothing booked, even though you could SEE the damn booking right there on a different app page. WTF? Again, customer service took their sweet time – TEN FRIGGIN’ DAYS – to cancel and return my ticket count to where it should have been, by which time it was almost too late to use it), and admonished me to be more careful, even though it clearly states you can cancel your booking anytime up to 2 HOURS before your show as long as you haven’t checked in without penalty. But apparently not without sarcasm on the part of their CSR’s.

Our plan also (allegedly) allows us to use the tickets we have purchased on most any feature at the theater, including those in Showcase X Plus and 3D, but excludes the MX4D theatre, which was fine with us, as we don’t always like being thrown around with our movie – we use that theater VERY sparingly (the last film I saw in the 4D theater was “Valerian And The City Of A Thousand Planets“, and that was the second time I’d been, I wanted to try it out in 4D, but Kim did NOT). However, the app refused to book any X-Plus or 3D features for us. We can get into the film, confirm our showtime, choose our seats, and then you hit “continue”…and you get NOTHING. It just SITS THERE. It won’t let us book either one. Any 2D film, the app WORKS FINE. On an XPlus or 3D feature, however, you can hit “continue” until you are blue in the face – believe me, this is something I have experienced, MORE than once – but it won’t budge. My app clearly shows my level as Premier, including all XPlus and 3D features, but the app is too damn STUPID to figure this out on the actual purchase page.

So today, I went into the app to pick up tickets for Friday’s “Godzilla King Of The Monsters” premiere. For some reason, they’re only showing two XPlus 3D screenings, and we had opted to do the one at 9:35 PM – the earliest it was available – and again, it refused to do it, getting stuck on “continue” over and over again. Finally, I just gave up, and tried doing an earlier 2Dscreenng in one of the teeny tiny theaters, and WHOOSH, it went right through. So we’re stuck with that, although it’s pretty sold out so it should be a good crowd of forty people.

Today, after the trouble with trying and failing to be able to book the XPlus showing, we talked it over and I finally threw in the towel – we officially cancelled our membership; we lasted a mere SEVEN months, and out of the 27 movies we could have seen during that time, we saw SIX – it’s just NOT WORTH IT.  I have thoroughly and completely had it. We’ll still go to Showcase, but we’ll pay regular prices again, because we don’t have a choice. And if AMC Stubs APlus or the new Arclight Cinema at Hub on Causeway in town opening in October have a couples plan at some point, or a newer, more stable MoviePass like service comes along, or Atom or Fandango starts offering a couples option, we’ll consider joining there.  Because quite honestly, Showcase is so obsessed with the huge tentpole films these days, once they’re committed almost nothing else – even another tentpole – will get into the X Plus cinema, which is the best theater they have. And while the other theaters are fine, sometimes I want to see a film on a huge screen in 3D, not in 2D in a smaller theater. And they have limited our options that way these days.

Maybe when Showcase can get their act together on their Subscribe service, and they’re able to start giving films equal runs in the larger formats and 3D, we’ll think about joining again…but for now…we’re done…