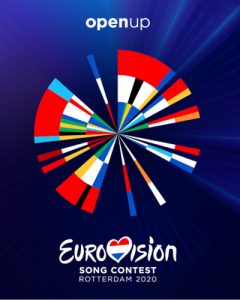 It’s mid-March – EXACTLY, actually, the “ides of March” (what the FUCK does that actually mean, anyway) and my birthday as well, and it’s time to head to Rotterdam in my head and take a quick first look at the 2020 Eurovision Song Contest, which, barring any ugliness from COVID-19 rearing it’s nasty ass head, is scheduled to take place May 12 (semifinal one), 14 (semifinal two), and 16 (finals), in Rotterdam, The Netherlands, who won last year’s contest with their entry “Arcade” by Duncan Laurence (which didn’t even make my top ten, what a “meh” song that was to me, but at least my pick, North Macedonia’s “Proud” by Tamara Todevska, finished second with the juries and seventh overall, not too bad…)

I spent the day yesterday checking out all 41 entries in the contest, and it seems to me that the operative word this year is “Disco”. Not EuroDisco either – at least twelve to fourteen of this year’s entries have an old school, 1970s “disco” beat behind them. I’m talking Bee Gees-Andy Gibb-Donna Summer-Barry White-Salsoul Orchestra sound – many complete with the “Silver Convention” string sound. It’s totally and unbelievably AWESOME!

Without giving away my top picks, which will pop up on my annual Countdown To Eurovision (which premieres NEXT SUNDAY, March 22, on eCinemaOne, The Kirkham Report, and Planet BiblioMusica), there are several standouts to me – several of which agree with the ESC fandom out there – and several which do not; two songs in particular that the ESC fan community has (as usual) inexplicably embraced are complete and utter shit (it happens every year, sigh), and we’ll get to those soon enough on the countdown.

There are also a number of lush ballads as always, several songs with a distinctly 1980’s vibe, two or three that are playing for the funky funny end of things, and of course, two or three songs that are utterly awesome that are getting totally and undeservedly shat on by the fans (see last year’s entry from San Marino, the always utterly awesome “Say Na Na Na” by Serhat).

I have to also admit, after taking time to think about things overnight, I’ve already rearranged the top three songs on my rankings, because they’re all fantastic songs, but one of them I just can’t get out of my head – I actually woke up with the tune in my head –  and so it moved into the top spot on the TC rankings, which will be revealed one by one, one each day, starting next Sunday March 22nd.

Now FIVE YEARS after getting bit by the Eurovision bug after it’s first US Airing in 2016 on Logo, I’ve gotten so deep into it that I’m checking out the national finals in each country, watching and waiting with baited breath for each song to be announced, and am looking forward to the launch of the American Song Contest in 2021, although I STILL think they’re making a mistake with it – it’s going to be the fifty states pitted against each other, instead of the countries of the Americas – North, Central, and South – against each other. We’ll see how well it goes.

At some point, after the end of this year’s Countdown, I will post a special blog picking my top 25 ESC entries of the last five years, which will include my top five picks from each year 2016-2020 – the years I’ve watched – ranked in order of my favorites, so that should be fun as well.

If like most of my readers you are in the United States, in order to watch ESC Live, you need to have a VPN account – the semi-finals have never been televised in the US, and the finals were dropped by Logo last year; you will need to hook up with a foreign broadcaster to see the shows, and you can’t do it without a VPN. You will be able to see the finals in their entirety approximately two hours after they’re completed on Netflix as last year, but to see things live, get yourself a VPN Account and join in the fun – trust me, if you’ve never seen Eurovision before, the shows are a spectacle to behold, and a hell of a fun time.

Things could get thrown for a loop by the Coronavirus/COVID-19 pandemic outbreak currently happening around the world, and on Friday, the European Broadcast Union, the official owner of ESC, released the following statement:

The EBU is closely monitoring the situation concerning the spread of the coronavirus and keeping abreast of the latest advice and guidelines from the WHO and national health authorities. We are working closely with Dutch Host Broadcasters NPO, NOS and AVROTROS and the City of Rotterdam to explore different potential scenarios for the Eurovision Song Contest 2020. However, with 2 months to go until the 3 live shows on 12, 14 and 16 May, and a rapidly changing situation both in the Netherlands and the countries of the participating broadcasters, it is still too early to make any final decisions. With this in mind, we’re continuing to work together as a team on preparations to host the 65th Eurovision Song Contest in Rotterdam.

Here’s hoping things settle down and that we’ll be able to enjoy this year’s Eurovision Song Contest as scheduled – I’ll keep you up to date. Be sure to check out the Countdown starting next Sunday here on eCinemaOne, as well as our sister blogs The Kirkham Report and Planet Bibliomusica, where we’ll keep you up to date on any decisions regarding this years contest, as well as the latter two having some ESC extras along the way as well.

If you like my countdown, please take a moment to join our PNRNetworks Patron Circle – it’s just $5 a month and helps us do great things for you, like our many sites and podcasts, and yes, even the countdown. Without your support, it’s very hard to keep things going. So please sign up at http://patreon.com/pnrnetworks – for just the cost of one latte or two cups of coffee, you’ll help us keep sailing into the future!

See you next Sunday for the start of the 2020 Countdown To Eurovision!