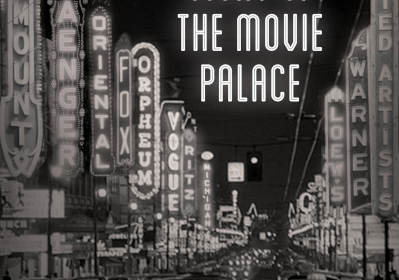 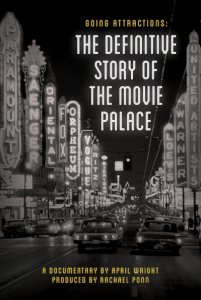 A few years back – 2013 to be precise – we talked a lot about a great movie about the history of the American drive-in movie. The film was called “Going Attractions: The Definitive Story Of The American Drive-In Movie“, and it was awesome!  We interviewed director April Wright at the time, and she and her film also came aboard as a sponsor for our 2016 “Drive In Summer” series on Subject:CINEMA.

Now, Wright is back with a sequel, and it’s also awesome and wonderful! “Going Attractions: The Definitive Story Of The Movie Palace” has it’s world premiere this Wednesday, August 7, at Flickers – The Rhode Island International Film Festival. She shot us an advance screener a couple weeks ago, and once again, April has captured the wonderful feel of the history of the movie palace as well as their sadly fading place in today’s theater world.

Rich with classic film and photographs of some of the most classic palaces across the United States, and replete with splendid interviews with film critic and historian Leonard Maltin, past and present owner/operators of various palaces, photographer and historian Matt Lambros from the incredible “After The Final Curtain” blog, members and directors of the Theatre Historical Society Of America, and many many others, this film is destined to be for palaces what her original film was for drive-in movies – and the voyage is well worth taking!

You can check out our full review of the film on the most recent episode of Subject:CINEMA.

To find out more about both films, and April’s complete canon of film over the past decade, check out her original site at http://goingattractions.com, and be a part of this wonderful film! And if you’re in Providence in the next couple of days, don’t forget to stop by Flickers and catch it as well! And check out the film trailer below!

Going Attractions: The Definitive Story of the Movie Palace – Trailer July 2019 from April Wright on Vimeo.